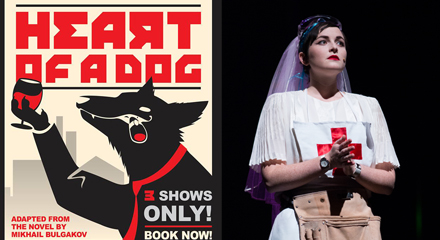 In May I had the privilege of workshopping a new Australian musical, Heart of a Dog. Written and produced by Jim McGrath and helped along by a grant from the Australian Arts Council, Heart of a Dog made it’s Australian premiere in Canberra at The Street Theatre. Three-weeks of intense rehearsals paid off when working with a talented, hard-working and gifted creative team. Being able to create a character and play a leading lady in a new Australian work was a big tick off the bucket list. I hope to continue to workshop this piece in future productions as well as working on other new musical projects.

Here’s an excerpt from Under the Moon, my favourite song I got to duet with Amy Dunham every night.

In other news, I did some modelling for Schwarzkopf at the Hair Expo (Australia and New Zealand’s “Oscars” of hairdressing). Working alongside some of Australia’s best hairdressing talent and having costumes designed just for me was a thrill. I’ll post some pictures from the night when I receive them from the producer.

Showreels Australia has been getting me in for some scenework with their clients which are great opportunities to work with Paul Barry from Los Angeles as well as get some professional television footage. Here’s a showreel with a bunch of work I’ve done over the past few months: